Current wait time for non-critical emergencies
is a minimum of 3 hours. 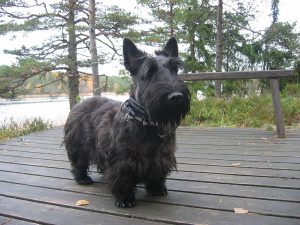 Did you know that there is a disease that only Scottish Terriers get? This disease is called the Scotty Cramp, it is inherited, and it causes your Scottish Terrier to have leg hyperextension, spasms, and hyperflexion. Studies have shown that this disease is caused by a serotonin deficiency, and usually occurs in younger dogs or puppies.

Symptoms can occur after exercise or some excitement and can last for several minutes. These symptoms may include an arched spine, a goose-stepping gait, and even somersaults that happen as the dog runs. These symptoms usually resolve themselves after about 10 minutes, but they can repeat 2 or 3 times a day. Unfortunately, it is recommended that if your Scotty has this condition, then they, their parents, and their litter mates shouldn’t be bred.

History Of The Scotty Cramp

Scotty (or Scottie) Cramp was first described by Klavenbek in 1942 in the book entitled “Scottish Terriers”. The terrier is normal at rest, and when it first starts to exercise. When the exercise is constant and excited, signs of this disorder begin to appear, Some dogs display a winging and slight abduction of its forelimbs, while others display arching in their lumbar spine and overflexing of their rear legs when walking.

Symptoms progress to include a goose-stepping gait. If the dog is running the rigidity of its rear legs can cause the terrier to somersault and fall. Some animals are affected so much by this disorder that they will end up running in place. Their heads overextend while the nose is pointed toward the ground. Ultimately the dog frequently curls up into a ball, and its breathing may appear to cease momentarily. After this, the dog will slowly recover and become normal. An episode of Scotty Cramp can last up to 30 minutes

How Veterinary Emergency and Critical Care Can Help

The veterinary doctors and staff at Veterinary Emergency and Critical Care can help your dog in a number of ways. First of all, they will give your dog a thorough physical exam, including urinalysis and blood count. Next they can help establish a diagnosis by giving your dog an injection of serotonin antagonists to see if they trigger an episode. Next, they may recommend a holistic treatment of behavior modification. If the owner has noticed that episodes start after a particular activity is engaged in, or after a particular stress level, they can be instructed to try and restrict that particular activity.

If the dog’s behavior is difficult or impossible to modify, then mild sedatives like Diazepam may be prescribed, which can be given in advance of a possibly stressful planned event. Prozac may also be given. Supplements may be prescribed that may help to build up the depleted serotonin. Finally, Vitamin E has been found to be beneficial in the reduction of attacks, but it doesn’t appear to have any effect on cramping severity.